Responsible Economics: E.F. Schumacher and His Legacy for the 21st Century 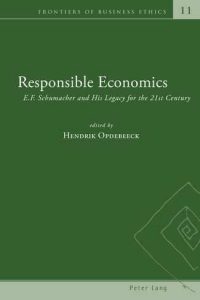 Responsible Economics- E.F. Schumacher and His Legacy for the 21st Century

The centenary of E.F. Schumacher’s birth (1911-1977) offered an urgent opportunity to revisit his work and life. Against the background of the crisis at the beginning of this century, reconsidering Schumacher’s Small is Beautiful or frugality paradigm makes clear that advances in responsible economics continue to be a priority. This book contains the proceedings of the 2011 Annual Conference of the European SPES Forum on ‘Responsibility in Economics and Business: The Legacy of E.F. Schumacher’, which was organised in September 2011 by the Centre for Ethics of the University of Antwerp in collaboration with the Business Ethics Center of Budapest. The aims of this conference were to celebrate the 100th anniversary of E.F. Schumacher’s birth and to engage with Schumacher’s vision to help address the present need for responsibility in economics and business. The answers to our current economic crisis presented in this book prove that the legacy of an economist and philosopher like Schumacher are not confined to a utopian economic paradigm. Utopian economic paradigms are concerned with a better economic situation in the future. Schumacher reconsidered today, however, makes it clear that society needs responsible economics invested in the sustainability of the globe, right now.

Contents: Hendrik Opdebeeck: Introduction: A Utopian Economic Paradigm? – Walter Moss: Schumacher’s Wisdom-Centered Economics – Laszlo Zsolnai: The Importance of Meta-economics – Gábor Kóvacs: Buddhist Economics – Roy Varghese: Authentic Development and Responsibility in Economics – Zubin Mulla: Karma-Yoga and Schumacher’s Theory of Good Work – Gerrit de Vylder: The East as a Practical and Spiritual Basis for Economics – Philip Bruce: The Legacy of Schumacher in the Scott Bader Company Today – Christian Arnsperger: Small is Beautiful: But is it Responsible? A Critical Reappraisal of E.F. Schumacher’s Contribution to Ecological Economics and Political Ecology – Carlos Hoevel: The Call for Responsibility and the Crisis – Michał Michalski: Economics as if the Family Mattered – Ludo Abicht: Who Really Needs Frugality? – Simon Trace: Responsibility in Technology – Luk Bouckaert: Schumacher and the Principle of Responsibility in Economics – Paul Jorion: Profit as One of the Questions of Schumacher – Knut Ims/Ove Jakobsen: Initiating an Open Research System Based on Creativity – Alexis Versele/Barbara Wauman/Hilde Breesch: Achieving Sustainable Housing – Joel Thompson: Recreating ‘Economics of Permanence’ in Africa – Bennie Callebaut/Luigino Bruni: The Economy of Communion as a Charismatic Practice – Stewart Wallis: The Urgent Need to Transform Economics – Hendrik Opdebeeck: Conclusion: From a Utopian towards a Uglobian Economic Paradigm. Schumacher’s Plea for Frugal Responsibility – Appendix: Proposal for a Charter of Universal Responsibilities presented at the Rio+20 Conference June 2012.