Does Western Buddhism Serve the Preservation of Capitalism?

In his article “From Western Marxism to Western Buddhism” philosopher Slavoj Žižek argues that “although Western Buddhism presents itself as the remedy against the stressful tension of capitalist dynamics, allowing us to uncouple and retain inner peace and Gelassenheit, it actually functions as its perfect ideological supplement.” He adds that “one should (…) ‘let oneself go,’ drift along, while retaining an inner distance and indifference toward the mad dance of accelerated process, a distance based on the insight that all this social and technological upheaval is ultimately just a non-substantial proliferation of semblances that do not really concern the innermost kernel of our being. (…) The Western Buddhist meditative stance is arguably the most efficient way for us to fully participate in capitalist dynamics while retaining the appearance of mental sanity.”

There is a lot of truth in Žižek’s view. Elements of Buddhist thought and practice are used in mainstream business. Global technology companies including Google are connecting to the power of mindfulness and meditation to drive sustainability and happiness in their business functioning. They employ the advices of the famous Zen master Thich Nhat Hanh and other Buddhist thinkers on how practicing mindful meditation at the workplace help companies to  improve their bottom line.

The question remains whether “doing things rights” without “doing the right things” in mainstream business contribute to the noble goal of Buddhism, namely to reduce suffering of all sentient beings. Without adopting the ethics of true compassion practicing Buddhist “economics” only contributes to the preservation of the system. The Buddha’s eyes order us to do different things and to do things differently. 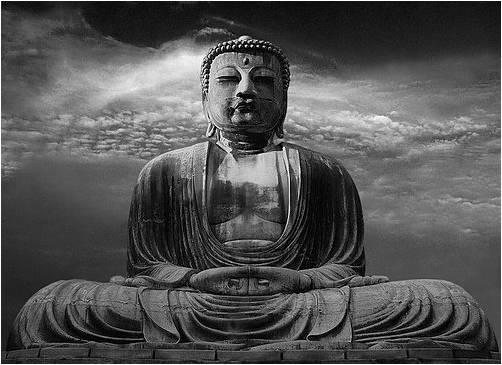